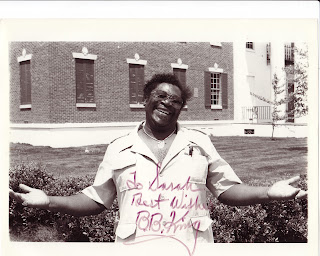 The first and best time I had the good fortune to be in B. B.'s company was 1981. All the reasons his death is mourned around the world now were on display then.
Three of us with the show PM Magazine on WHBQ-TV in Memphis, drove our white van with its pink and orange logo down the historic blues route of Highway 61. Indianola, Mississippi, B. B.'s childhood town, is smack in the Delta, and we'd come to do a segment on him.
He came back every year to give his B. B. King Homecoming concert, free. While back, he also would play for the inmates at Parchman Farm, Mississippi's state penitentiary. Under a scorching sun at aptly-named Parchman, he played to inmates who looked forward each long year to those short hours. I remember that when any inmate feeling the music tried to stand up from the benches in that paltry outdoor arena, a warden would come along and order him back down.
B. B. King never charged a cent for those shows either.
In back of his generosity stood his astounding talent.
Listen to this 1956 rendition of Crying Won't Help You  from his first LP. The voice that he could bend as adroitly as he bent the notes on Lucille is younger, but everything that made him famous is already there.
https://www.youtube.com/watch?v=tBR7TO_CjXw
Our second day in the Delta, he took us to the plantation where he'd worked, starting at age seven.  From the van's back seat, he drank white zinfandel from a cup.
As our camera framed him in front of those cotton fields, he told us how the bell would ring before dawn to rouse the fieldhands. B. B. and the others chopped cotton "from can 'til cain't," which he said was "from the time you could see until you couldn't." Depending on the cotton's season, that long day might be spent stooped over.
The blues he heard in those fields came through. 'Cause in my song, every line is for real.
That's from my favorite of his tunes, I Like to Live the Love I Sing About. It's one he wrote, and this 1974 performance of it in Africa captures the sheer felicity of his voice. https://www.youtube.com/watch?v=F1IruWGGbn4&list=PLB607D39E834C60DE&index=1
B. B. King's words, even when spoken rather than sung, flowed with melody and richness. He'd honed that tone as a radio announcer at WDIA in Memphis.
B. B. had the Southerner's knack for storytelling. He talked to us about mid-century Beale Street, the stretch of Memphis made famous by the blues.
"The guys would buy pretty nice clothes, and other people thought, you know, when you spend lot of money for a pair of shoes, a lot of money for a suit, that you were just doing that to be well groomed. Not so. You did that so in case you got broke, you could always go to the pawn shop and get something for it."
Here's what I want to know: Did any other performer ever rack up as many stage hours as B. B.? It wasn't unusual for him to do more than 300 concerts a year, and he did that for decades. We asked him about his habit of almost never cancelling a single one of those concerts.
"You have people who are doing everything to make this possible," he said, "and then there are people who could've gone someplace else who decided to come. So one me don't show up hurts a lot of people."
B. B. King grew up singing gospel, and churchgoers disdained blues singers and their devilment. But he noticed one way the blues rose above gospel. After work would stop in the cotton fields at noon on Saturdays, he'd play his guitar on Indianola's street corners. "People wouldn't tip you for a gospel tune," he told us with a chuckle, "but they'd tip you for the blues."
My two later times with him were briefer. His open-hearted way showed up at both. In the mid-'80s I wrote the script for a couple of years for the Blues Awards, the annual show where the W. C. Handy honors are given out. True to style, B. B. appeared on the Orpheum stage in Memphis without charge to emcee and perform. Willie Nelson joined him as host my first year; Carl Perkins co-emceed the second. My scripts ran long, stuffed with every whit of fascinating but divergent blues minutiae I'd researched. I hadn't figured out that people were there to hear great music, not words about the music. B. B. and his fellow emcees handled my scripts with undeserved grace.
Our culture's panting after celebrity fails to parse out the talent, doesn't it? To my way of thinking, celebrity doesn't mean squat. It's talent I admire, especially when underscored by devotion to the gift and a beneficence of spirit. That's worth our esteem.
And that would be why the world bows goodbye now to the undisputed King of the Blues.
B. B., may your music never, ever leave us.
Posted by Sarah Scott at 8:57 AM